Power in Her Hands: Breaking the Culture of Silence Surrounding Sexual and Gender Based Violence Through Technology By Chibuike Alagboso 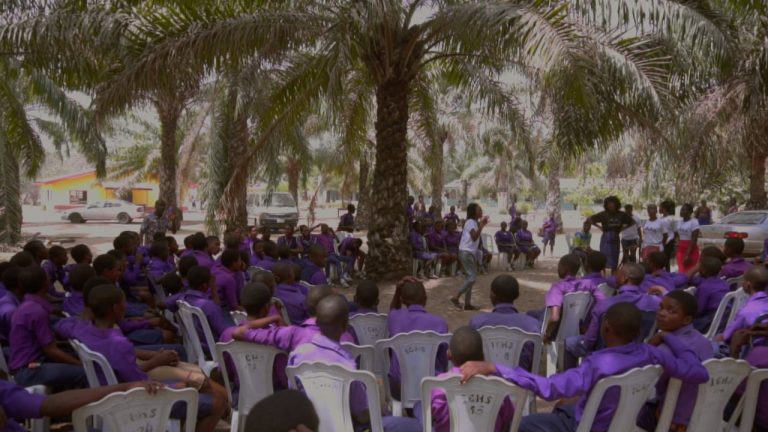 The United Nations Children Fund (UNICEF) puts the number of girls who experience sexual violence in Nigeria at one in every four. Data makes it possible to measure the true scale of the problem. However, for Omowumi Ogunrotimi, the founder and Executive Directive of Gender Mobile Initiative (GMI), ‘one in every four’ is more than just a statistic, it represents any man, woman or child whose life has been forever changed by sexual violence. 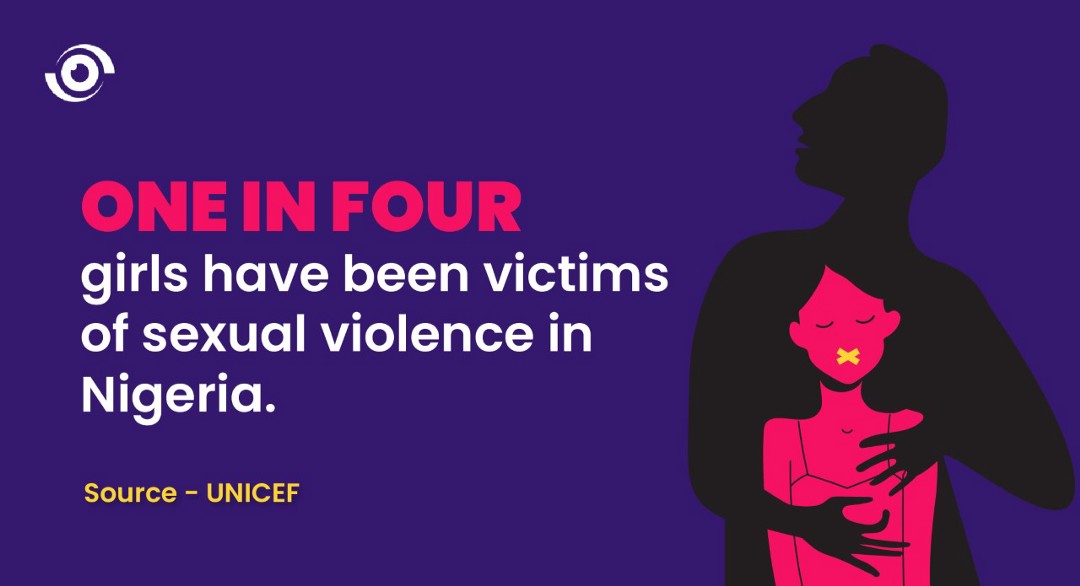 At age 14, Ogunrotimi was sexually abused by a trusted neighbor. Despite seeking professional help with the support of her family, she was still made to keep silent about the incident; the same culture of silence that is perhaps one of the biggest challenges to addressing Sexual and Gender-Based Violence (SGBV). Two years later, her best friend lost her life while trying to terminate a pregnancy that resulted from rape. Ogunrontimi said the inability of her friend’s family to afford quality medical care after she was raped opened her eyes to how social stigma and the culture of “domestic silence” can impede access to life-saving healthcare interventions.

Motivated by her experience, engagements with younger girls in her community, as well as the current disturbing SGBV trend, after completing law school Ogunrotimi and her team set up a platform with a simple vision — to build a just and equitable society devoid of all forms of gender-based violence. With teams now operating out of the Federal Capital Territory (FCT) and Ekiti State, GMI has since its inception in October 2017, supported SGBV survivors and their families to access emergency response services.

GMI started as a 24/7 call centre and a web-based platform where people could call in to report SGBV cases and are followed up with psychosocial, medical, and legal support. Within one year of running the call centre, the organisation found that over 80% of reports they received came from campus communities. The BBC investigative documentary “Sex for Grades” exposed the prevalence of sexual abuse in higher education institutions and laid bare the power dynamics between lecturers and students that enabled the sexual exploitation of female students. 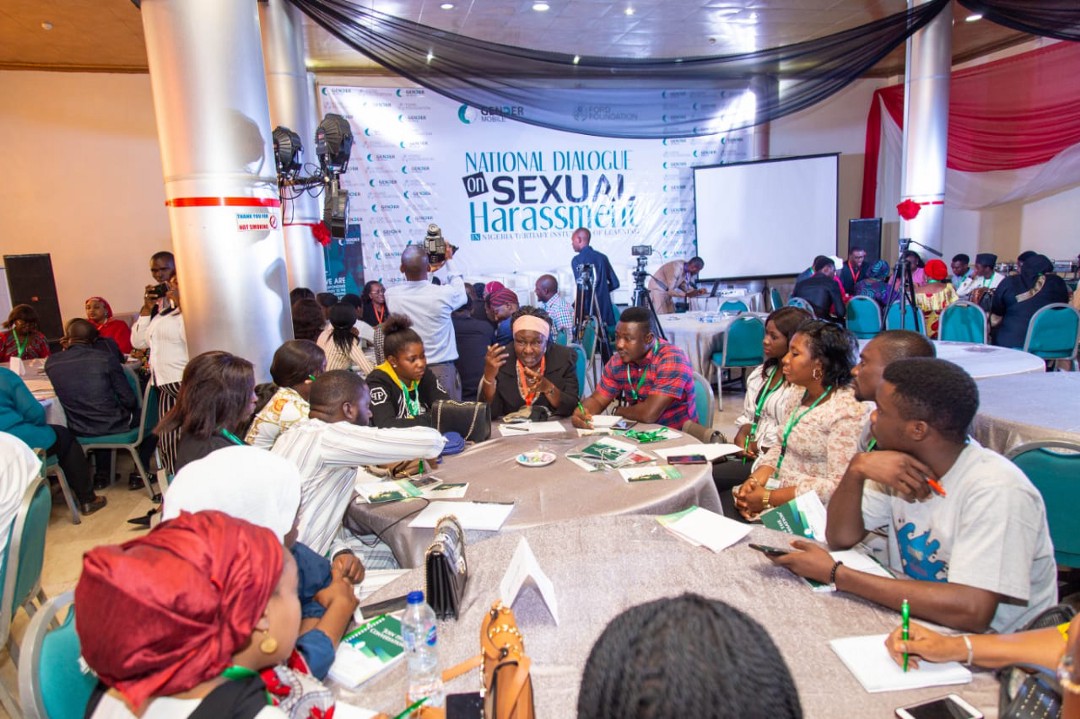 GMI then channeled their interventions towards universities because, “we adopt a data-driven approach to ensure that whatever interventions we are pushing out as a product responds to actual problems,” Ogunrotimi said. Their initial idea was a simple platform where people can receive information and are connected to resources, but they quickly realised that an effective response to SGBV cases required them to employ varying approaches. 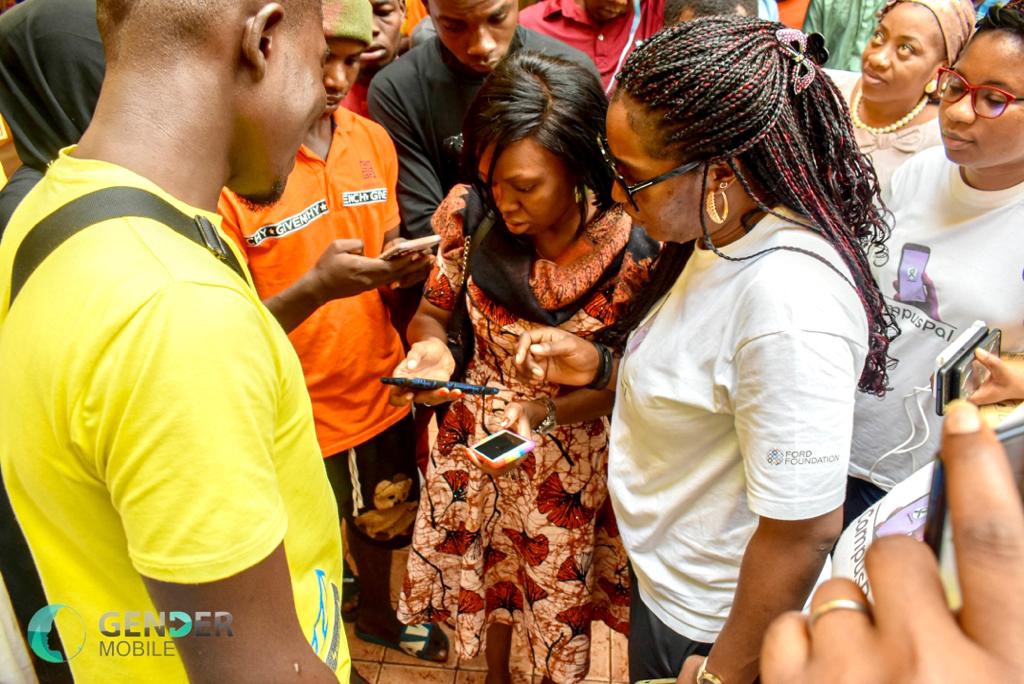 In April 2021, they launched the ‘Campus Pal’ mobile app as part of their Campus safety initiative. The app leverages technology for confidential reporting of SGBV incidents in schools. The initiative also involved policy engagements with senior management of universities to strengthen their internal mechanisms for addressing sexual harassment cases. Dr Helena Tsaninomi Emikp-Agbajor, the Director of Linkages and Gender Studies at the College of Education, Warri, Delta State said the awareness created by GMI has helped to significantly reduce cases of sexual harassment in the institution. “GMI initiated the idea of the sexual harassment prohibition policy which was non-existent in the school before. With the policy, students know there’s a system in place to protect them. We hardly hear of these cases again,” she said. The management has approved for copies of the policy to be printed for distribution to students and staff, she proudly added. 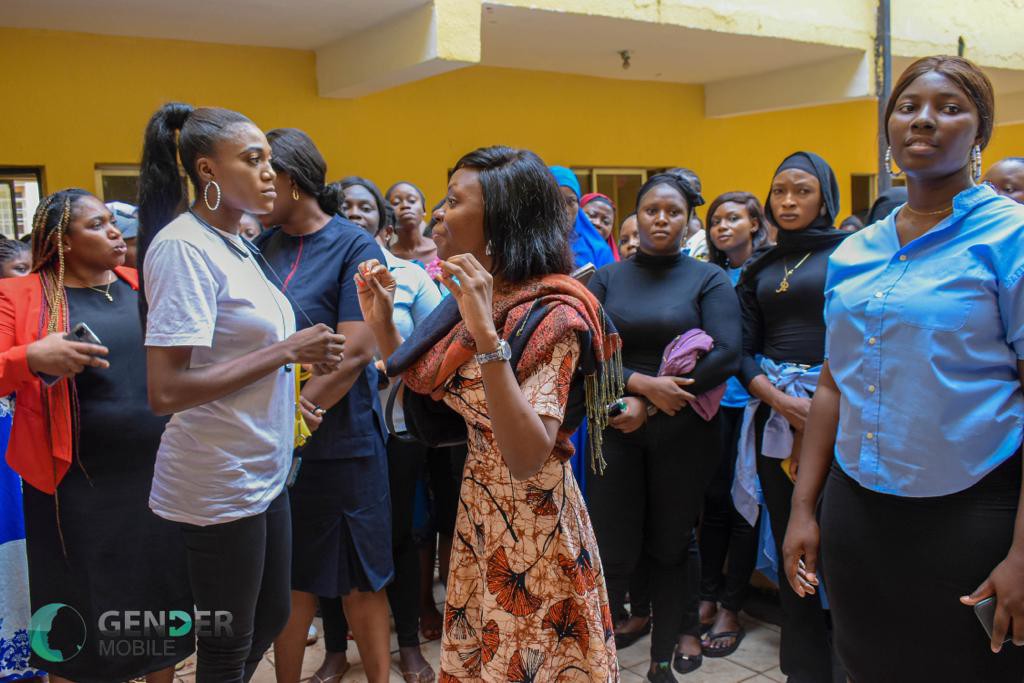 Campus Ambassadors help promote the use of the Campus Pal app in their institutions and also act as proactive bystanders by reporting cases. This helps fight the culture of silence which promotes SGBV. Photo Credit: Gender Mobile Initiative

The campus safety initiative also involves engaging and training Campus Ambassadors to support the process of reporting sexual abuse in their respective schools. Modupe Adetiba, president of the National Association of Female Students is one of the ambassadors. She joins GMI on advocacy visits to university leadership and recommends universities without sexual harassment policies to GMI. This way, GMI can support the drafting of the policy and provide technical support for implementation. 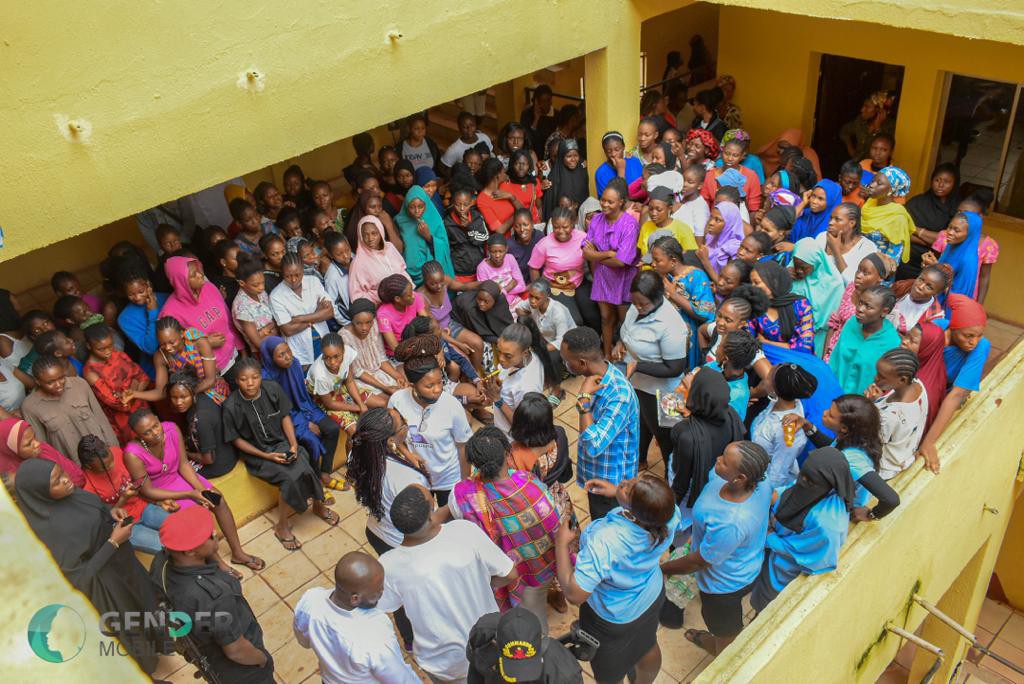 Organising hostel tours in student communities provides safe spaces for students to give feedback on how they use the campus pal mobile app. Photo Credit: Gender Mobile Initiative

Adetiba is happy with the app’s potential to curb the culture of silence in schools. “One of the challenges we face is situations where we try to follow up a case and the student turns around to say they were not abused”. She said this discourages the campus ambassadors, but one of the app’s features collates reports against the same lecturer and helps build up evidence for further investigations. Like the #MeToo movement, Adetiba said survivors need to come out with their stories and speak out against known perpetrators of sexual harassment.

Evolving, Learning, and impacting on the go

GMI adopted a proactive response strategy designed to equip adolescents aged 10 to 19 with information on how to prevent and respond to SGBV, as well as to encourage them to speak out, and in 2021 alone, they reached over 2000 young people. But this wasn’t without its challenges as in some schools, the authorities didn’t give them enough time to engage with the children. But the time they had was well worth it as it enabled some students to open up about being sexually abused. 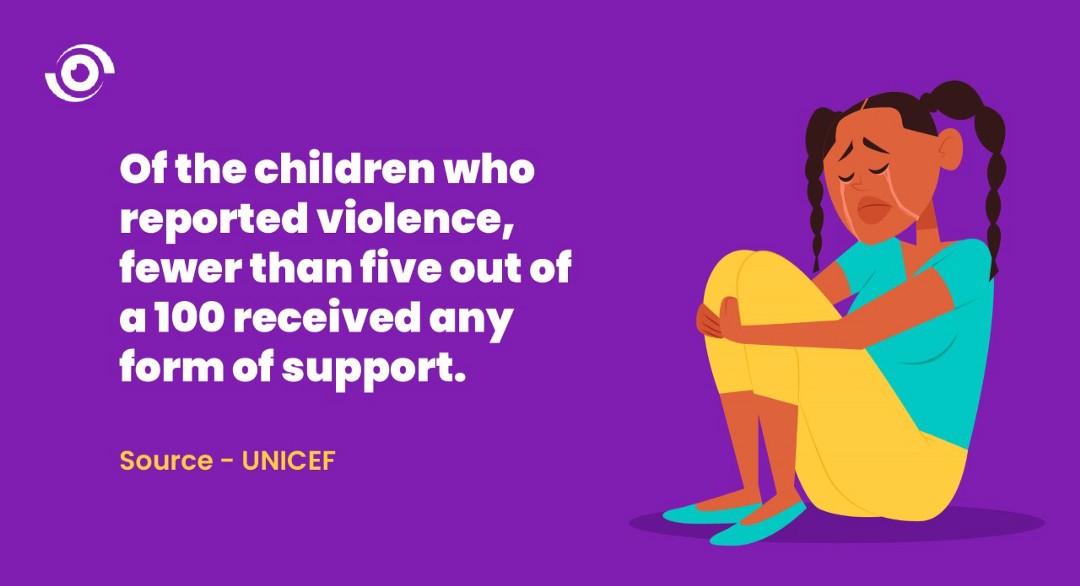 Understanding the value of economic empowerment in the prevention of SGBV, Gender Mobile through its ‘Skill-Up’ program offers free training to women on how to make leather and beaded slippers and wigs. After the training, the women are given free startup equipment and the necessary supplies to produce their first round of products. Even though she believes this is essential as it reduces the absolute dependency that sometimes leaves a woman vulnerable to SGBV, Dr Damilola Agbalajobi, a gender and development specialist and lecturer at the Obafemi Awolowo University believes it may not be enough. “Sometimes even when you are economically empowered, societal norm and the power-relations of inequality predisposes women and vulnerable groups to abuses and different forms of violence,” she said, adding that what will help make a difference is value reorientation which has to begin from the home with everyone involved. 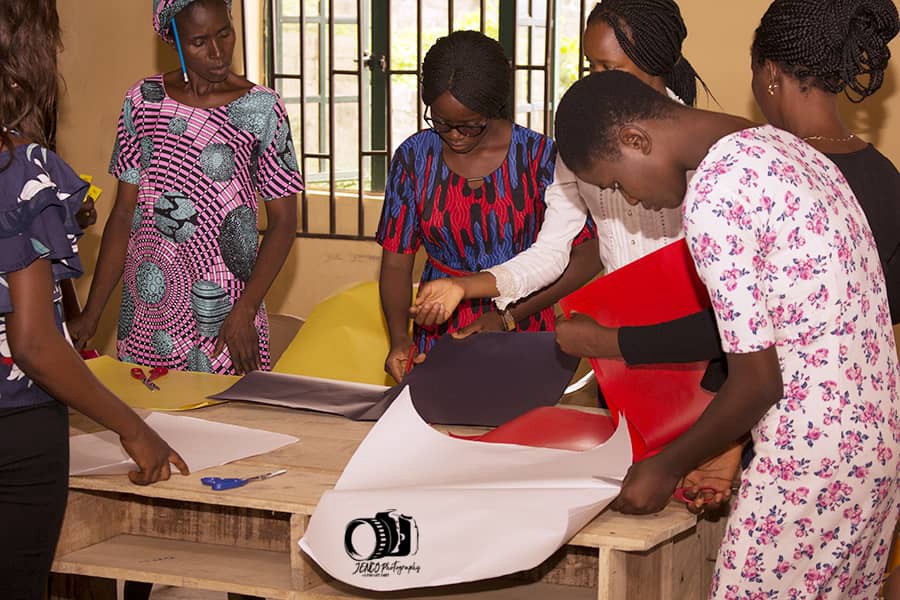 March 8 was International Women’s Day, and it presented an opportunity for advocates to reaffirm their commitment to ensuring that women are not disadvantaged or face any form of violence because of their gender. On the same day, the Federal House of Representatives rescinded its decision on three out of five pro-gender bills which it had previously discarded. This is a commendable first step because no meaningful inroads can be made in the work of advocating against SGBV without legal backing. The next step is to continue the advocacy for states to domesticate and implement the violence against persons prohibition (VAPP) act and other related laws. 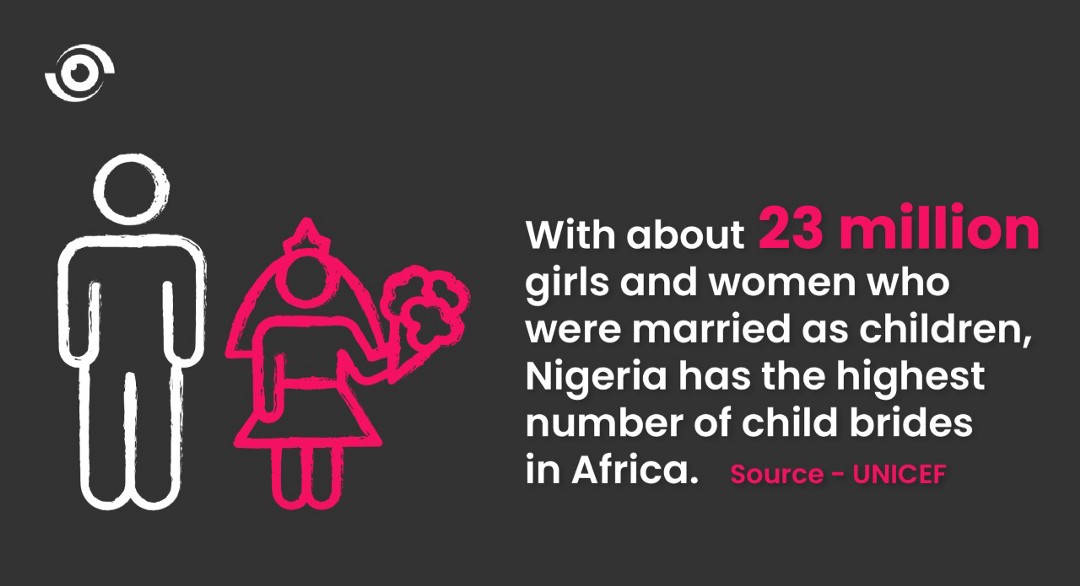 A lot of hard work is being done by GMI and other organisations like them: Spotlight Initiative, Brave Heart Initiative for Youth and Women, Stand to End Rape Initiative, Domestic and Sexual Violence Response Team of Lagos State and Mirabel Centre, and there is still a lot to do because SGBV cases continue to be reported and the statistics have not changed much. This was further exacerbated during the pandemic where women and young girls were locked in with their abusers and this Shadow Pandemic saw an increase in domestic violence cases. However, like Ogunrotimi and her team, these organisations seem to have one thing in common — the desire to continue pushing until all forms of sexual and gender-based violence are eliminated. 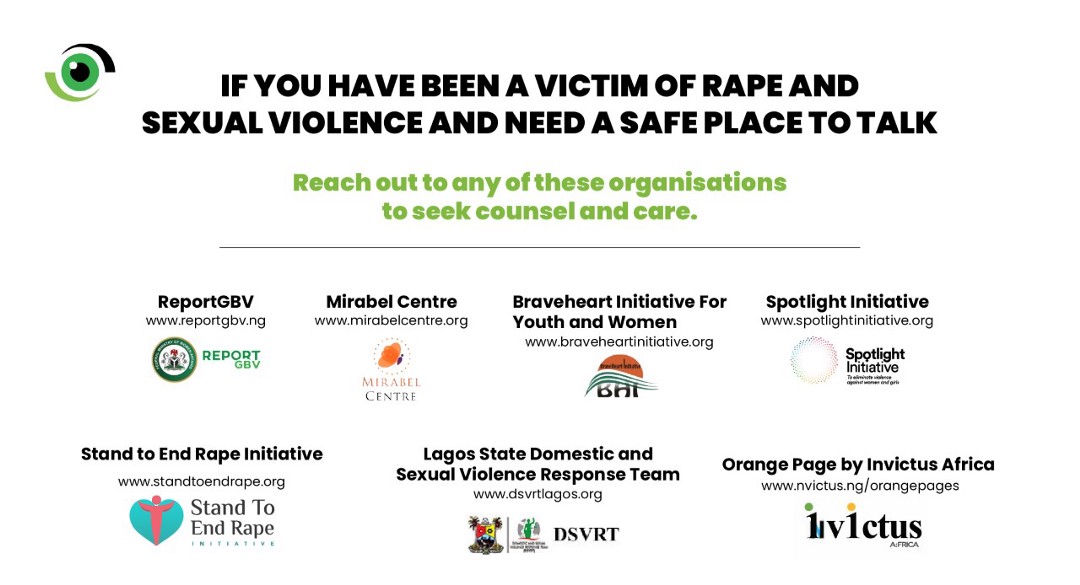 Their desire may be an arduous task but it’s not an impossible one. It might not seem like it, but gender-based violence hurts all of us and so, we must adopt a whole-of-society approach where all of society — families, academic institutions, governments, communities, religious and traditional organisations — gets actively involved in breaking the culture of silence and advancing the necessary societal change.

A World Health Organization research states that one in Seven, 10 – 19-year-olds experience mental disorders and account for 13% of the glob...